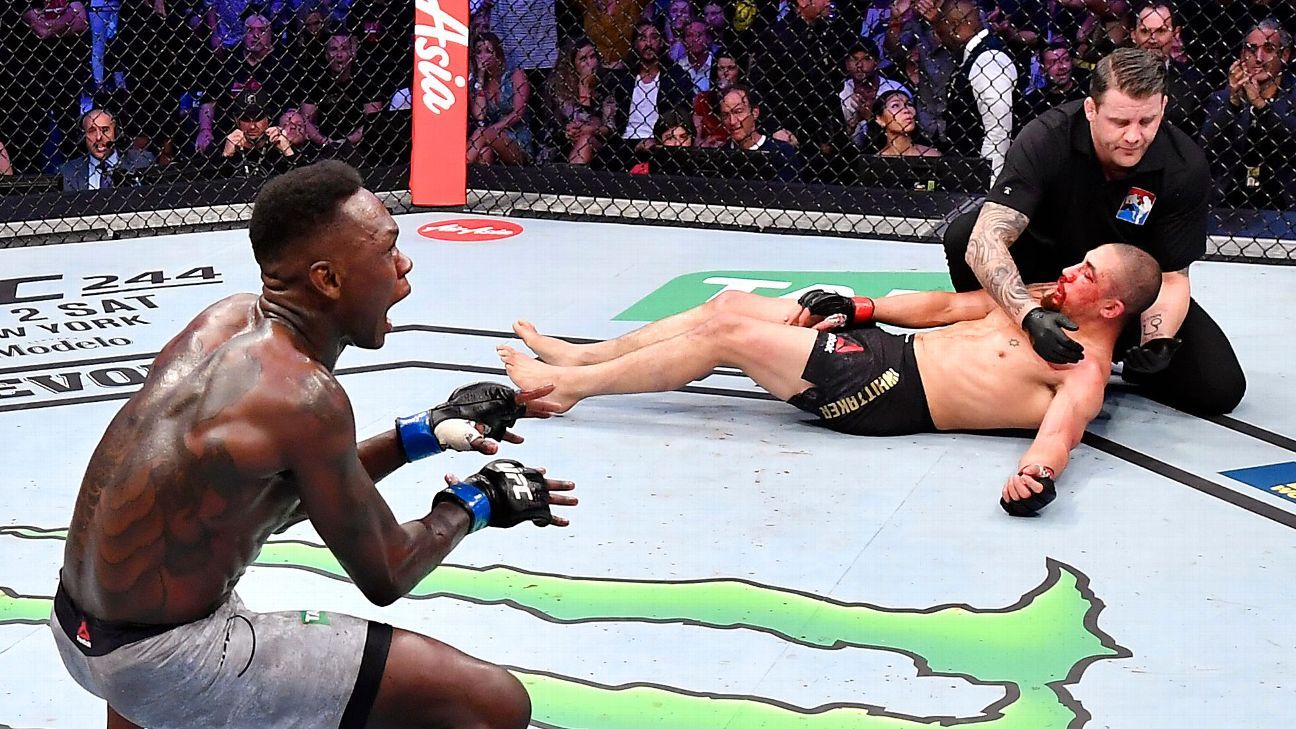 The UFC has a new undisputed champion. And maybe a new superstar on its hands, too.

Israel Adesanya knocked out Robert Whittaker with a right hook-left hook combination at 3:33 of the second round Saturday in the main event of UFC 243 in Melbourne, Australia. Adesanya unified the middleweight title with the stoppage victory. He came in as the interim champion and Whittaker was the lineal champion.

The knockout was reminiscent of Anderson Silva, the legendary former UFC middleweight champion and Adesanya’s idol. Whittaker blitzed in with punches, Adesanya evaded and then landed two quick hooks in rapid succession. Whittaker crashed to the ground and Adesanya followed with punches on the ground to make it academic.

“He caught me with a nice one, but I returned,” Adesanya said. “I eat it, but give it back two times. That’s a two-piece right there. I can take it and give it back. He’s right, I hate to get hit. It’s stupid to get hit. I’m tough and smart. At the end of the day, my team and I were smart.”

Adesanya dropped Whittaker right at the first-round bell. The crowd erupted at the sequence and no one could hear the bell that ended the round. But referee Marc Goddard was on top of the action and stopped it before Adesanya could follow up.

Whittaker had moments blitzing in with punches against the taller, longer Adesanya in the first round and a bit in the second round, as well. But by the end of the first Adesanya seemingly had Whittaker figured out and looked loose on the feet.

“He threw everything we expected,” Adesanya said. “We had everything planned for plan A to Z. it’s unreal. They said I have no knockout power.”

The bout was one of the biggest in UFC middleweight history and took place in front of more than 57,000 at Marvel Stadium, a UFC attendance record. It was billed as an inter-country Oceania rivalry. Whittaker was born in New Zealand, but has spent most of his life in Australia. Adesanya is Nigerian-born, but has lived in New Zealand since he was 13 years old.

Whittaker and Adesanya came in ranked Nos. 1 and 2, respectively, among middleweights in ESPN’s MMA rankings. Whittaker was tied for No. 8 on ESPN’s pound-for-pound list.

The last time the UFC was at this stadium it was UFC 193 in 2015, when Holly Holm knocked out Ronda Rousey. Adesanya sat far away as a fan during that card and now he has won a UFC title in the same setting.

“I was in the nosebleeds and now I made his nose bleed,” Adesanya said.

Adesanya (18-0) has won all seven of his fights in the UFC and is considered one of the hottest up-and-coming MMA athletes in the world because of his charisma and ability to promote fights. The Nigerian-born “Last Style Bender” was coming off a Fight of the Year-candidate victory over Kelvin Gastelum for the interim title at UFC 236 in April.

Adesanya, 30, is behind only Khabib Nurmagomedov with regards to most victories for a fighter with an undefeated record. Of Adesanya’s 18 career victories, 14 have come by knockout or TKO.

Whittaker (20-5) had won nine straight coming in and had not lost since 2014 when he was a welterweight. “The Reaper” was coming off back-to-back victories over Yoel Romero in 2017 and 2018.

Whittaker, 28, had not fought since June 2018 and oddly didn’t have a single title defense because of injuries, illnesses and Romero’s weight miss until Saturday. He held the middleweight title since late 2017.

Before leaving the Octagon, Adesanya and Paulo Costa, his likely next contender, had an exchange of words and profane gestures. In the post-fight interview, Adesanya referred to Costa as an “overly inflated balloon animal.”

“You know who’s next,” Adesanya said. “I have a heavy Ricky Martin wannabe next. ‘Borrachinha.’ This is my Octagon. I’m going to smash him. I want to rearrange his face.”