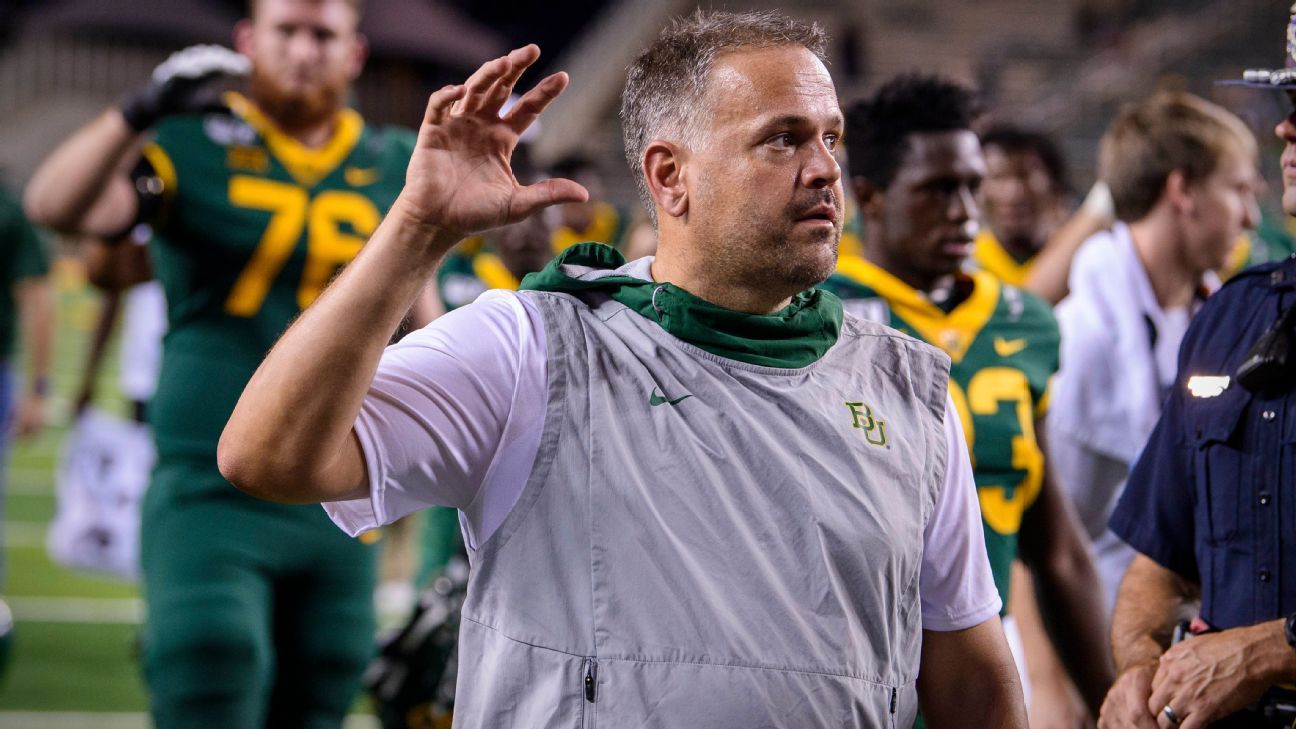 Baylor officials have reached a contract extension with third-year football coach Matt Rhule, which could take him through the 2027 season, the university announced Sunday.

Rhule has guided the Bears to a 4-0 start this season after Saturday’s 23-21 victory over Iowa State. He has a 12-17 record in two-plus seasons with Baylor.

Rhule inherited a program that was plagued by accusations of sexual misconduct by players and the mishandling of other off-field issues, which led to the firing of former coach Art Briles and resignation of other university officials in 2016.

The Bears went 1-11 in Rhule’s first season in 2017 and 7-6 in 2018, including a 45-38 victory over Vanderbilt in the Academy Sports + Outdoors Texas Bowl. It was the largest increase in wins by a Power 5 program last season.

Rhule, 44, signed an original seven-year contract with the Texas school that would have taken him through the 2023 season. The school said he would receive an increase in salary, along with performance and retention bonuses, but didn’t release the annual salary average or total value of the new deal.

“Since arriving at Baylor in December 2016, Waco has become our home. My family is very happy here,” Rhule said in a statement. “Baylor, its mission, and its people are a tremendous fit for myself and our staff and all the things we believe in. Most importantly, I have grown to love these players and I am proud of the things they are accomplishing on and off the field.”

Rhule, a former Penn State linebacker, was 28-23 in four seasons as Temple‘s coach in 2013-16. He interviewed with Oregon officials before taking the Baylor job in December 2016. He also met with the Indianapolis Colts about their head-coaching vacancy in January 2018.

“I’m incredibly excited Matt and [his wife] Julie have decided to extend their time at Baylor,” athletic director Mack Rhoades said in a statement. “I truly feel Matt was called to Waco, and as a family, they are a wonderful asset to the greater community. … We look forward to continued growth in all areas under his leadership. Matt is without a doubt one of the elite head football coaches in the country.”

The new deal, which runs through March 31, 2028, is expected to be formally ratified by the school’s board of regents Nov. 1.

The Bears still have unresolved issues with the NCAA concerning the sexual assault scandal that led to Briles’ firing and a restructuring of the university’s leadership. After an investigation and administrative process that has lasted more than three years, a hearing with the NCAA’s Committee on Infractions hasn’t yet been scheduled.