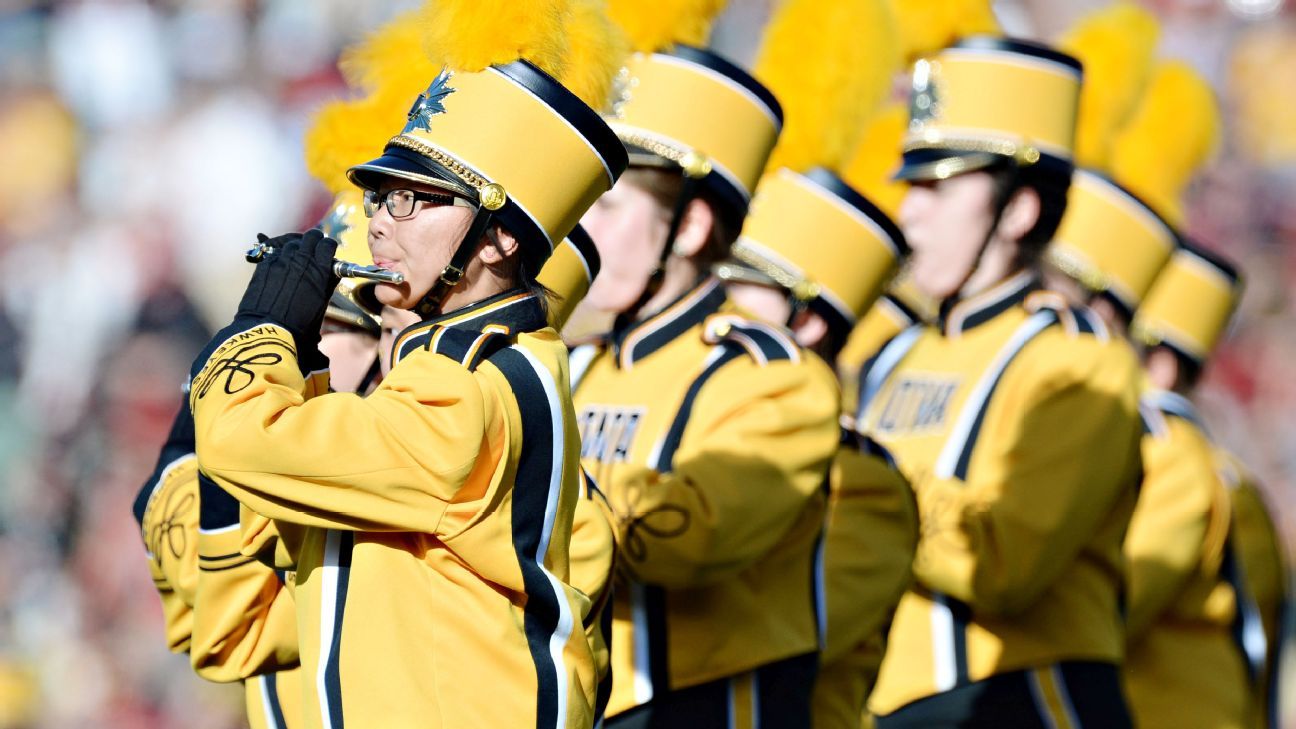 The Cy-Hawk rivalry game between Iowa and Iowa State could be in jeopardy after University of Iowa president Bruce Harreld questioned whether it should be played in the future in an interview with the school newspaper, the Daily Iowan.

His comments came in the wake of members of the Hawkeye marching band saying they were verbally, physically and sexually harassed at the Sept. 14 game in Ames, Iowa.

“I’m not convinced at all that we should play this game again — here or there or anywhere — unless we can protect our fans, our band, and of course our athletes,” Harreld told the paper on Monday, adding that he expected to be able “to work through this.”

“If for some reason one party or the other doesn’t come to the table,” he told the paper, “then no, why would we?”

On Tuesday, Iowa State athletic director Jamie Pollard said that “it’s critical that we do everything possible to continue to maintain this series.”

Pollard, who held a joint news conference on Tuesday with ISU Police Chief Michael Newton and ISU president Wendy Wintersteen, said an Iowa deputy athletics director called him on Sept. 18 and listed “five alleged incidents,” but he said that no police reports had been filed by either school.

“Chief Newton and his team, fully investigated to the best of our ability, those five incidents, and concluded that it was going to be really tough to know exactly what happened,” Pollard said.

One of the incidents involved the band leaving the field after the game, Pollard said. He said the misinformation spreading is an image of the band walking off the field to the bus and being “attacked by Cyclone fans.”

“For whatever reason the Iowa marching band did not do that,” Pollard said. “They chose to leave the field through the west side of the Jacobson building where there will thousands of people still shoulder-to-shoulder in a snail’s pace trying to work through that small entry way. The Iowa marching band marched in formation playing their instruments through the back of that crowd and essentially forced their way through a crowd there was no place for anybody to move to.”

On Sept. 20, Iowa reopened its investigation into allegations detailed in a report from the Cedar Rapids Gazette, which included accounts from band members who said they experienced verbal and physical sexual harassment and assault, and lasting bruises from objects that were thrown. Two band members quoted in the story said one woman was sent to the hospital with fractured ribs.

Third-year band member Corey Knopp, 21, who plays tenor saxophone, told the Gazette he was among those assaulted.

“A girl’s ribs are broken because of fan interaction,” Knopp told the paper. “A member of the band was cornered by a number of males and was assaulted.”

“We expect to be booed and the usual rivalry game antics,” he was quoted as saying. “But never physically and sexually assaulted.”

Newton said Tuesday that it’s “very difficult to actually launch an investigation when there’s actually no complainants that come forward.”

Regarding the five specific incidents, Newton said he was not told “what, where, when, how the incidents occurred.”

“I’ve been in constant contact with the University of Iowa police to make sure that if anything comes in, we’re prepared to respond to that and we would launch an investigation as soon as a complainant were to come forward,” Newton said. “What I do know is the University of Iowa had four police officers with the band, and not any of those officers reported any incidents to us.”

Newton said the incident that garnered the most attention was the band’s exit. He said his officers described it as a “skirmish” because “there was some pushing and shoving because they were pushing into the backs of people as they marched aggressively out of the stadium.”

“They were marching faster than the people can walk in that area,” Newton said, “and playing their instruments.”

He said the officers immediately responded to help the band get through safely.

“During that time not a single individual from the band reported any confrontation to the law enforcement officers,” he said. “Following that, the University of Iowa police officer did go on the buses and was with the band, and nobody reported any incidents to that officer.”

Pollard said he believes the band experienced profanity, rudeness and had things thrown at them — because, he said, the Iowa State band has experienced the same at Iowa.

“We all have to do better,” he said. “That means our fans need to do a better job of policing our fans, but so do the Iowa fans. This has got to be a collective approach to not let that type of behavior happen. However, the misinformation that continues to be perpetuated has to stop.”

Harreld declined further comment to ESPN through a university spokeswoman on Tuesday.