One of the UFC’s biggest middleweight fights goes down Saturday in Melbourne, Australia.

Champion Robert Whittaker and interim titleholder Israel Adesanya will unify the belts in the main event of UFC 243 at Marvel Stadium in front of what is expected to be one of the biggest crowds in MMA history. Whittaker calls Australia home, and Adesanya lives in New Zealand, adding more to the Oceania flavor of the event. Whittaker and Adesanya are also Nos. 1 and 2, respectively, among MMA middleweights in ESPN’s rankings. 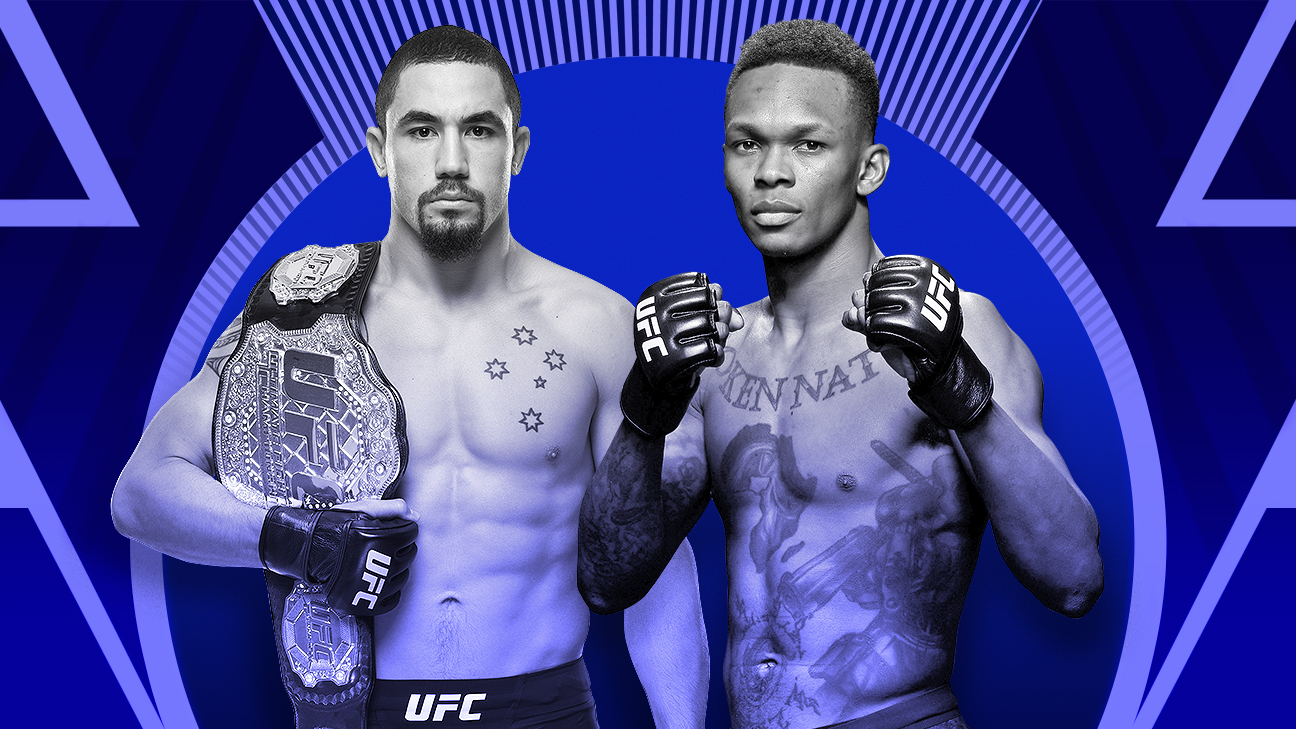 Every fight from UFC 243 is available to watch on ESPN+.

Watch the complete card on ESPN+

Whittaker (20-4) has won nine straight and has not lost since 2014, when he was a welterweight. “The Reaper” is coming off back-to-back victories over Yoel Romero in 2017 and 2018. Whittaker, 28, has not fought since June 2018 and doesn’t have a single title defense due to injuries, illnesses and Romero’s weight miss. He has held the middleweight title since late 2017. Whittaker is tied for No. 8 on ESPN’s pound-for-pound MMA list.

Adesanya (17-0) has won all six of his fights in the UFC and is one of the hottest up-and-coming MMA athletes in the world. The Nigerian-born “Last Style Bender” is coming off a Fight of the Year candidate victory over Kelvin Gastelum for the interim title at UFC 236 in April. Adesanya, 30, is behind only Khabib Nurmagomedov in most victories by a fighter with an undefeated record.

Stay here for results and analysis.

Very quietly, the younger fighting Lima brother has put together a nice run. Lima, using his family’s trademark hard leg kicks early and often, beat Jumeau by split decision (28-29, 29-28, 29-28) in one of his best performances to date.

Lima’s older brother, Douglas, is a former two-time Bellator welterweight champion and one of the world’s best welterweight fighters. Douglas was in his brother’s corner on Saturday.

Dhiego Lima pounded Jumeau’s leg in the first round and dropped him with a kick to the calf in the second round. Jumeau hurt Lima with an uppercut in the second, but Lima countered with a left hook that wobbled his opponent. In the third, Lima stayed with his leg kicks and landed nice punching combinations to cement the victory. Lima (15-7) has won three straight after snapping a three-fight losing streak. The 30-year-old Brazilian, who lives and trains in Georgia, was cut by the UFC in 2015 but returned two years ago and has found his footing. Jumeau (13-5), a 31-year-old New Zealand native, is 2-2 in his past four fights.

Tafa trains with Mark Hunt, but it was De Castro who landed a walk-off knockout befitting of Hunt, the MMA and kickboxing legend.

With Tafa blitzing in on attack, De Castro landed a vicious right hook that put Tafa out before he touched the ground. The fight was stopped at 2:10 of the first round.

De Castro (6-0) came into the UFC after knocking out Alton Meeks on Dana White’s Contender Series in June. The 31-year-old Massachusetts resident said he wants to fight again in December, so he can continue to make money for his family. Tafa (3-1), a 25-year-old Australia native, was making his UFC debut.

No, it wasn’t the prettiest performance, but surely Matthews will take it coming off a loss. Matthews secured a unanimous decision (30-27, 30-27, 30-27) win over Akman despite playing Akman’s own game. Matthews told Jon Anik in the post-fight interview that his initial plan was to take Akman down, but he heard the announcers say he was a good striker, so he decided to stand up with him.

“That’s just what we Aussies do,” Matthews said.

Matthews did out strike Akman throughout in what was a relatively uneventful bout. Matthews scored a takedown in the third to all but seal the outcome. Matthews (15-4) has now won four of his last five fights. The 25-year-old is still attempting to fulfill the potential many thought he had when he debuted in the UFC in 2014 as a 19-year-old. Akman (6-2), a 27-year-old from Sweden, has lost two straight to start his UFC run.

“It’s hard for the fans to understand, but if he was a top-10 fighter I would have swung for the fences,” Matthews said. “This was a very dangerous fight for me. He’s a relative newcomer, and I’ve been here for 12 fights. I had to show that maturity and experience. I felt completely in control. Most of my fights are a blur, but this one I was aware of everything going on. I’m very happy with that. I got the win, which is the main thing.

“I asked for Carlos Condit this fight, but I know he’s fighting Mickey Gall next. So once Carlos is done smashing Mickey, I’d like to have that legend fight.”

Callan Potter and Maki Pitolo tee off on each other with an epic series of punches in Round 1. For more UFC, sign up here for ESPN+ http://plus.espn.com/ufc.

In a fight that featured plenty of uncontested punches to the head, it might have been wrestling and grappling that won it. Potter sealed a unanimous decision (29-28, 29-28, 29-28) win over Pitolo with a pair of big takedowns in the third round of a welterweight bout. Pitolo landed some big punches in the first, and Potter rallied in the second with some hard shots against the cage.

In the third, Potter landed blows on the ground after getting Pitolo to the mat. The second takedown was a slick lateral drop to counter a Pitolo single-leg takedown attempt.

“If I get on top of people, normally it’s over,” Potter said. “He was good to defend the submissions.”

Potter (18-8) earned his first UFC victory after dropping his debut at UFC 234 in February. The 35-year-old Australia native is 2-2 in his last four fights. This was only his second win via decision. Pitolo (12-5), a 28-year-old Hawai’i native, was making his UFC debut after impressing on Dana White’s Contender Series in July.

“Even though I’m getting older, I’m showing I have the skills to fight at the top level,” Potter said. “I’d like to have a bit of a rest, but my last two fights have been in Melbourne. I’d like to travel the world and maybe get that Vegas experience in my next fight.”

With both fighters on their knees in the final seconds, Brad Riddell hammers Jamie Mullarkey with a right hand. For more UFC, sign up here for ESPN+ http://plus.espn.com/ufc.

It was a good start to the card for New Zealand’s City Kickboxing.

Riddell, Adesanya’s training partner, earned a unanimous decision (30-26, 30-6, 29-27) victory over Mullarkey in a back-and-forth brawl. In the third, both men were rocked, exhausted and threw just about everything at one another. By the end, both were bleeding from their faces and Mullarkey’s left ear was so swollen it looked like it would pop if a blow landed to it.

Riddell, 28, did most of the damage throughout. He had the sharper striking, landing beautiful combos, including some very nice left hooks to the body. Mullarkey was able to get Riddell down and do damage from top position in the second. In the third, Mullarkey dropped Riddell with a left hook. But Riddell recovered and poured it on with huge punches. At one point, Riddell landed a nasty left-hook-to-the-body-right-elbow combination.

Riddell (7-1) has won four in a row. This was the New Zealand native’s UFC debut. Mullarkey (12-3), a 25-year-old Aussie, had a four-fight winning streak snapped. He was also making his UFC debut.

“This is the best debut I could have ever had, on the best card I’ve ever been on,” Riddell said. “He’s pretty tough. It definitely wasn’t my best performance, but I got a win.”

Megan Anderson defeated Zarah Fairn by triangle choke in the first round.

Megan Anderson shows the Marvel Stadium crowd just how much it meant to return to fight in Australia and pick up an impressive submission win.

Apparently, Anderson, a 6-foot Australian, saves her submissions for her home country. The last time Anderson earned a submission victory was in 2014 — also the last time she fought in Australia. It was only the fourth triangle choke finish of the year in the UFC.

Fairn closed the distance aggressively to start. Anderson pulled her into a clinch, took her down and got into full mount. When Zairn attempted to sweep, Anderson transitioned into a nice triangle from the bottom. Anderson (9-4), the former Invicta FC women’s featherweight champion, was coming off a first-round submission loss to Felicia Spencer and is known for her striking, not her ground game. The 29-year-old slugger has now won two of her last three fights. Fairn (6-3), a 32-year-old France native, was making her UFC debut.

“I feel amazing,” Anderson said. “I know I haven’t fought to my potential in my last couple fights. I wanted to show who I am. I’m a well-rounded fighter, and it’s amazing to come home to Australia. I needed to prove to myself that I’m one of the best in the world. I can’t wait for what’s next.

“This is amazing for me to have a clean-cut finish, especially from a position a lot of people thought I wasn’t good at. I’ve worked so hard and am excited to show who I am. I’m more than just a striker.”

Yi Jeon Jim unleashes a series of punches that cause Nadia Kassem to lose her mouthguard, and the ref pauses the fight briefly. For more UFC, sign up here for ESPN+ http://plus.espn.com/ufc.

From ESPN Sports & Information Group: It was the second career KO/TKO win for Kim and the first since May 2015. She has won two of her last three UFC fights. Kim was the -175 favorite. Kassem lost her second consecutive fight, both by stoppage.

Khalif Taha nails Bruno Silva with a right and left combo that sends Silva to the mat briefly in Round 1. For more UFC, sign up here for ESPN+ http://plus.espn.com/ufc.

“He was very good on the ground,” Taha said. “He has good control, but he wasn’t that dangerous. I knew I was going to finish him. In the third, I started to land ground-and-pound. I felt he was done. He moved and gave me the side choke. I trained it so much and got him.

“I don’t want to call out anyone, but I would like to fight anyone who moves me up the ranks. So I’ll keep that for my management and the UFC. I just want to say thanks.”

From ESPN Sports & Information Group: It was the third-career submission win for Taha, extending his win streak to two after losing his UFC debut in July 2018. Silva had a three-fight unbeaten streak snapped in his UFC debut, and it was his second loss by submission. Taha cashed in as a -240 favorite.