RoastedAmala
Home Sport Weekend Watch: Braves or Nats — who would be tougher out in...

All but one of the division races are looking settled, but that doesn’t mean there aren’t storylines that capture the imagination around baseball. Here’s what has our attention this weekend:

The two National League teams with the best chance of knocking off the Dodgers right now seem to be the Braves and Nationals, who opened a four-game series Thursday. Who would be a tougher playoff foe for L.A. — Atlanta or Washington?

Eddie Matz: Sure, the Nationals’ offense has been busting out the whooping stick. And yes, their top three of Max Scherzer, Stephen Strasburg and Patrick Corbin are stronger than Atlanta’s (even if Scherzer isn’t back to his old self by the playoffs). But the Braves are good. Like, really good. So good that Washington, which has the best record in baseball since May 24, can’t seem to make up any ground in the NL East. The only reason to pick Washington here would be the rotation. But October is about bullpens, and Atlanta’s is way better. So I’d say the Braves would be the tougher out for L.A. 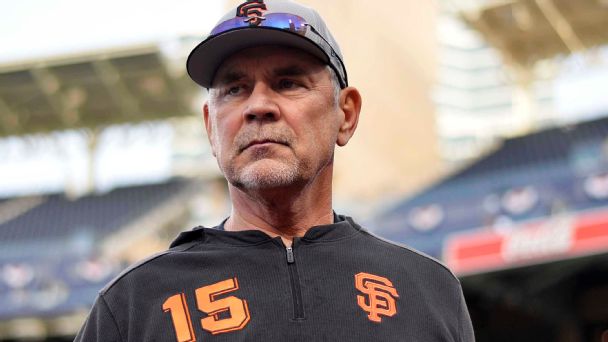 Indians at Twins, Sat., 7:10 p.m. — Rookie Aaron Civale (1.94 ERA in seven starts) goes for Cleveland, which would need a huge weekend to have any hope of catching Minnesota in the AL Central.
Cubs at Brewers, Sat., 7:10 p.m. — With a chance to essentially squash Milwaukee’s postseason hopes in its home park, the Cubbies turn to Yu Darvish, who was scratched from his last start.
Nationals at Braves, Sun., 1:20 p.m. — Still getting up to full speed, Max Scherzer faces a tough test in the red-hot Braves.
Giants at Dodgers, Sun., 4:10 p.m. (ESPN+) — L.A. could be in line to clinch the NL West as San Francisco’s Bruce Bochy manages his final game in Chavez Ravine.
Yankees at Red Sox, Sun., 8 p.m. (ESPN) — Are we witnessing the final weeks of Mookie Betts playing his home games at Fenway Park?
All times ET.

Sam Miller: The unsatisfying answer is that it’s the Nationals because it’s easier to beat a far superior opponent in a smaller sample than a larger one. If the Nationals get past the wild-card game, they’ll face the Dodgers in a best-of-five series. If the Braves get past the division series, they’ll meet the Dodgers in a best-of-seven. But take that technicality out of it, and Eddie’s probably right. Washington has the edge at the top of the rotation, but if we look at each team just in games that their top three have started, the Nationals haven’t actually shown that advantage: They’re 47-32 when Scherzer, Strasburg or Corbin starts, while the Braves are 46-22 when Max Fried, Dallas Keuchel or Mike Soroka does. The Nationals’ bullpen is just toxic.

David Schoenfield: It’s pretty remarkable, really: Even with that toxic bullpen, the Nationals do have that best record in the majors over an extended period of time. That suggests that they’re so good everywhere else that they can overcome the bullpen, although I have a difficult time imagining Fernando Rodney getting through Cody Bellinger, Justin Turner and Max Muncy in a crucial situation. So maybe it gets to some of the other matchups, and since the Dodgers are better against right-handed pitching with all their lefty mashers (their OPS is 45 points higher against righties), maybe the Braves with lefty starters Fried and Keuchel have an edge there, as the Nationals have just one lefty in Corbin. Then again, Soroka’s OPS against lefties is 200 points higher than vs. righties, so that’s a tough matchup for him. I guess I’m back to Fernando Rodney. The Braves are the tougher foe.

With a nod toward Sunday night’s Yankees-Red Sox game (ESPN, 8 p.m. ET) and to Buster Olney (we’re stealing his Twitter poll question), what do you think will happen to Mookie Betts — he gets traded this winter, he gets traded next summer, he leaves Boston as a free agent after 2020, or he signs a long-term deal to stay with the Sox?

Matz: As disappointing as this season has been for Boston, there’s no reason to think that the defending champs can’t rebound and make another run next year, which is why general manager Dave Dombrowski won’t trade Betts this winter. If the World Series hangover lingers into 2020 and the Sox find themselves hovering around .500 next July, I could see Dealer Dave going the Manny Machado route and shipping Mookie elsewhere to restock a farm system that has fallen on hard times. But I don’t think that happens. As for an extension, I don’t think that happens either because Betts is too in touch with the whole marketing and business side of things. Despite the recent free-agent depression, he knows he could make a killing. Which is exactly what will happen.

Miller: OK, I could maybe imagine a big-market team that’s projected to win, say, 90-92 wins next year, in a tough division, deciding that Mookie Betts would be the difference between making and missing the 2020 postseason. And maybe it thinks continuity would give it a better chance of signing him when he hits free agency, so there would be some extra benefit to having him on the team before his walk year. Put those together and maybe that club would be willing to offer something absolutely overwhelming to employ him for the 2020 season. The team that best describes is … the Red Sox. They’ll keep him until his free agency, and then they’ll be the favorite to re-sign him.

Schoenfield: My prediction: Mookie stays … and then Mookie leaves as a free agent. (He signs with the Angels to give Mike Trout some help, plus Mookie will relish being out of the media spotlight in Boston and letting Trout be the guy. Or maybe he signs with the Rangers, who will need a star attraction in the second year of their new park. Wait, the Astros! George Springer and Michael Brantley are also free agents after 2020. How about the Braves? Mookie is from Tennessee and that’s close to home. Or maybe …)

There are a few other series with potential playoff teams squaring off: Indians-Twins, Cubs-Brewers and Phillies-Mets. Which of those series do you find most intriguing?

Miller: The Cubs and Brewers, just because of the animus. None of these teams are really competing with each other for a playoff spot right now: The Twins have a firm grip on the American League Central, the Phillies and Mets are playing more for respectability and relevance than realistic hopes, and the Brewers are almost certainly gassed out. But the Brewers and Cubs can at least play for the privilege of severely harshing a rival’s mood. The Cubs can essentially end the Brewers’ season; the Brewers could move the panic index in Chicago to orange.

ESPN’s Buster Olney leads the discussion of the latest news and notes around baseball with the game’s top analysts. Listen

Schoenfield: I’ve probably watched the Mets more than any other team this season (I live in Connecticut, so the Mets, Yankees and Red Sox are my local teams), so why quit now? Plus, there’s the chance that Bryce Harper does something wonderful in what has been a decidedly blah season for him, or that Jacob deGrom pitches a no-hitter, or that the Mets blow a six-run lead in the ninth. Wait, that last one is silly. That could never happen.

Matz: I’m not terribly intrigued by any of them, really. At least not from a playoff perspective. Because you’d have to squint pretty hard to convince yourself that any of these three matchups have serious playoff implications at this point. Having said that, Minny and Cleveland are the two best baseball teams among the six in question here. And all things being equal, I’d rather watch good baseball than bad baseball. So I’ll go with the Twindians series.

Circling back to Braves-Nats, which trio of teammates will have more total bases this weekend: Atlanta’s Freddie Freeman, Ronald Acuna Jr. and Josh Donaldson or Washington’s Anthony Rendon, Juan Soto and Trea Turner?

Schoenfield: Oh, this is a good one. Rendon is locked in right now, but so is Donaldson. Freeman has been Mr. Consistent Superstar all season long. I’ll give the edge to the Braves’ trio — they’ll get to face the Nationals’ bullpen at some point.

Miller: Atlanta has home field, Washington has the hotness. Rendon and Soto are both in the top 10 in total bases in the second half, and even Turner is within single digits of the Atlanta three. I don’t usually put much faith in hotness. Atlanta wins this one.

Matz: When it comes to total bases, round-trippers reign supreme. While Atlanta’s troika consists of three legit long-ball threats, that’s not the case with Washington, where the speedy Turner (13 homers) sticks out like a sore thumb among the sextet involved here. I’ll take the Braves bashers.

Cardinals righty Jack Flaherty is on quite a roll (0.59 ERA over his past seven starts). Baserunners allowed by Flaherty vs. the Pirates on Sunday: over or under 5.5?

Schoenfield: Flaherty not only has a 0.59 ERA over seven starts, but he has a 0.90 ERA and .141 average allowed over his past 11 starts. I watched his last start against the Giants (one hit in eight innings) and it was complete domination: He threw just 29 balls to 26 batters faced and his 100th pitch was 97 mph, his hardest of the game. Buster Olney compared him to a young Justin Verlander: He’s got the size, he’s got the stuff and he’s starting to show he has the ability to pitch deep into games. Is he the best pitcher in baseball? The track record isn’t long enough to declare that, but he’s certainly the hottest. Under 5.5.

Matz: As hot as Flaherty has been, the Pirates’ offense has been just as hot. Over the past two weeks, Pittsburgh has a .381 on-base percentage and is averaging 7.2 runs per game, both best in the majors. Over, please.

Miller: I figured this would be an easy over, but the under would have won in six of Flaherty’s past eight starts — and he allowed only six runners in the other two. Still, the Pirates have the biggest platoon split in baseball, roping right-handers for a .275/.338/.446 line. I think the over is right; can I convince you to count hit batsmen?

Each week, we ask our panelists to choose one hitter they think will hit the most home runs and one pitcher they think will record the most strikeouts in the coming weekend. Panelists can pick a player only once for the season. We’ll keep a running tally — and invite you to play along at home.